Hearing and improving your time and rhythm

A jazz musician’s sense of time is one of if not the most important defining aspect of his or her playing.

As a soloist, you can play “wrong” notes with a good time feel, and it will sound much better than “right” notes with a poor sense of time.

What do I mean by a poor sense of time? I mean playing phrases that lack a flow that emotes a consistent personal groove. That groove can be notes on the beat or behind the beat – probably not ahead of the beat.

Playing ahead of the beat in jazz usually sounds wrong. It sounds nervous or anxious, which is the opposite of a good jazz feel. Now, realize that when we talk about a particular placement of notes or the groove of a melodic line, there are degrees and sometimes a fine line between a groove and no groove.

Listen to Dexter Gordon. Dexter played behind the beat but he did something else we can all learn from. He “played” with the time. His sense of time was like a lazy river flowing downstream, sometimes hitting objects that sped it up a bit and then back down, but always with a consistency that seems very organic and natural. I hear Dexter almost laughing as he plays with the time.

No matter your instrument, learn some phrases from Dexter. Maybe listen to his Manhattan Symphonie album. Start with Body and Soul. Listen to the intro and how he plays this line just slightly behind the piano player:

The critical aspect of Dexter’s playing that you must hear is that he doesn’t lag behind in a way that sounds like an inexperienced player struggling to keep up. He’s in complete control. He’s expressing his particular sense of time. It’s consistent, musical, and full of his individual personality.

Record yourself singing this two-bar phrase over the recording and listen for any difference between where your singing starts the notes and Dexter.

Next, record playing those two bars on your instrument and listen for any differences. Most likely, you will be ahead of Dexter and at least not consistently with him throughout the two bars.

Too many of us have been taught that playing with the four clicks of a metronome develops within us good time. Now, there’s nothing wrong with practicing with a metronome as long as you understand its purpose.

Practicing with a perfect clock like a metronome will tune your own internal sense of accurate time. But metronomic time is not the end goal. It is a means to build control over your articulation of time, however your musical personality hears time.

I don’t mean to imply that the placement of notes is completely subjective and arbitrary. It is personal, but there are characteristics of time for a musician that tend toward a more musical performance.

The point of this article is to make you aware of a tendency you may have for an inconsistent sense of time or one that places notes ahead of the beat sounding like I said earlier, nervous or anxious.

Your sense of time is a major part of your musical personality. Dexter speaks through his horn in a completely different way than, say, Bird or Trane. But both Bird and Trane have a clear consistency to their time. There is no ambiguity as to where their notes get placed and note placement is an important part of their musical identity.

This week, I had a little back and forth with a good guitar player who took me up on my challenge to send me a snippet of his playing for my feedback.

I mentioned to him that he had a consistent tendency to rush. He wrote back that he had never before heard that in his playing but, “Now I can’t NOT hear it!” And he now has something important to listen for and to focus on that will elevate his already good playing.

I suggest that you find a player who has a time feel you admire and do the very same exercise I suggested with Dexter’s few notes on Body Soul. Mirror their playing.

When I recommend to “mirror their playing”, it’s not to turn you into that player or to inherit their particular sense of time, but rather to heighten the acuity of your hearing time.

Exercises like I’m suggesting are ways to hear your playing at a level you haven’t likely yet experienced.

Maybe you’re spending so much of your attention looking at printed music that you can’t fully or deeply hear the subtleties of your own articulation.

Here’s a worthwhile exercise using the metronome. Set it to a moderate tempo on beats two and four. Record yourself playing something simple like the head of a tune or a ii-V-I lick.

Here’s another. I’ve created a series of exercises using what I call the Maniacal Metronome. It consists of a string of clicks that begin as quarter notes, but then go to three clicks to a beat, five, six, seven, and others. But the underlying pulse stays the same.

The point of this exercise is to give you more than a rigid four clicks to a beat and train yourself to keep that steady beat throughout.

Feeling adventurous? Improvise over it. Here’s an example with me playing over the Maniacal Metronome. Notice that my time is not rigidly on the beat. But my lines solidly and musically flow over that fundamental pulse.

There are other elements of playing within a groove which includes your articulation and your breathing through the phrases if you are a wind player.

You’ll start to hear these things if you listen. Listen to yourself as you play and to recordings you make using just your phone if that’s all you have.

Also, listen to other players – your bandmates, inexperienced musicians, and masters. Can you describe their sense of time? Is it rushing, behind the beat, inconsistent, or a flowing groove?

What is the difference in note placement between Dexter, John Coltrane, Anthony Braxton, Dave Liebman, and Ornette Coleman? Can you describe those differences? They are all different.

Listen with the same intensity and intent to James Brown and Frank Sinatra. How is their sense of time different? Do they have similarities?

Describe what you hear out loud and be specific. This will clarify in your own mind aspects of time that you haven’t before thought about.

Your sense of time is a critical and defining aspect of your playing. Pay close attention to it, be able to describe it, and start to purposely craft it to be uniquely yours.

Want to take your personal development of time to another level? Check out my book Rhythm Savvy. Click the book image below to learn more. (And yes, it has three flavors of the Maniacal Metronome!) 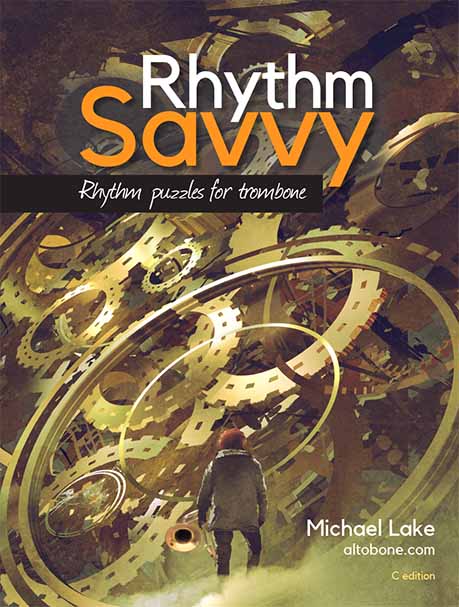