How is your sense of jazz time?

I’ve been listening to Youtube videos of jazz players. Not the stars, but players who most people would consider to be very capable. If you consider music skill and talent to be a smooth continuum, I want to talk about the players in the circled part of the line below. Not the greats at the top nor absolute beginners at the bottom, but in that lower-mid level of skill, experience, and talent: 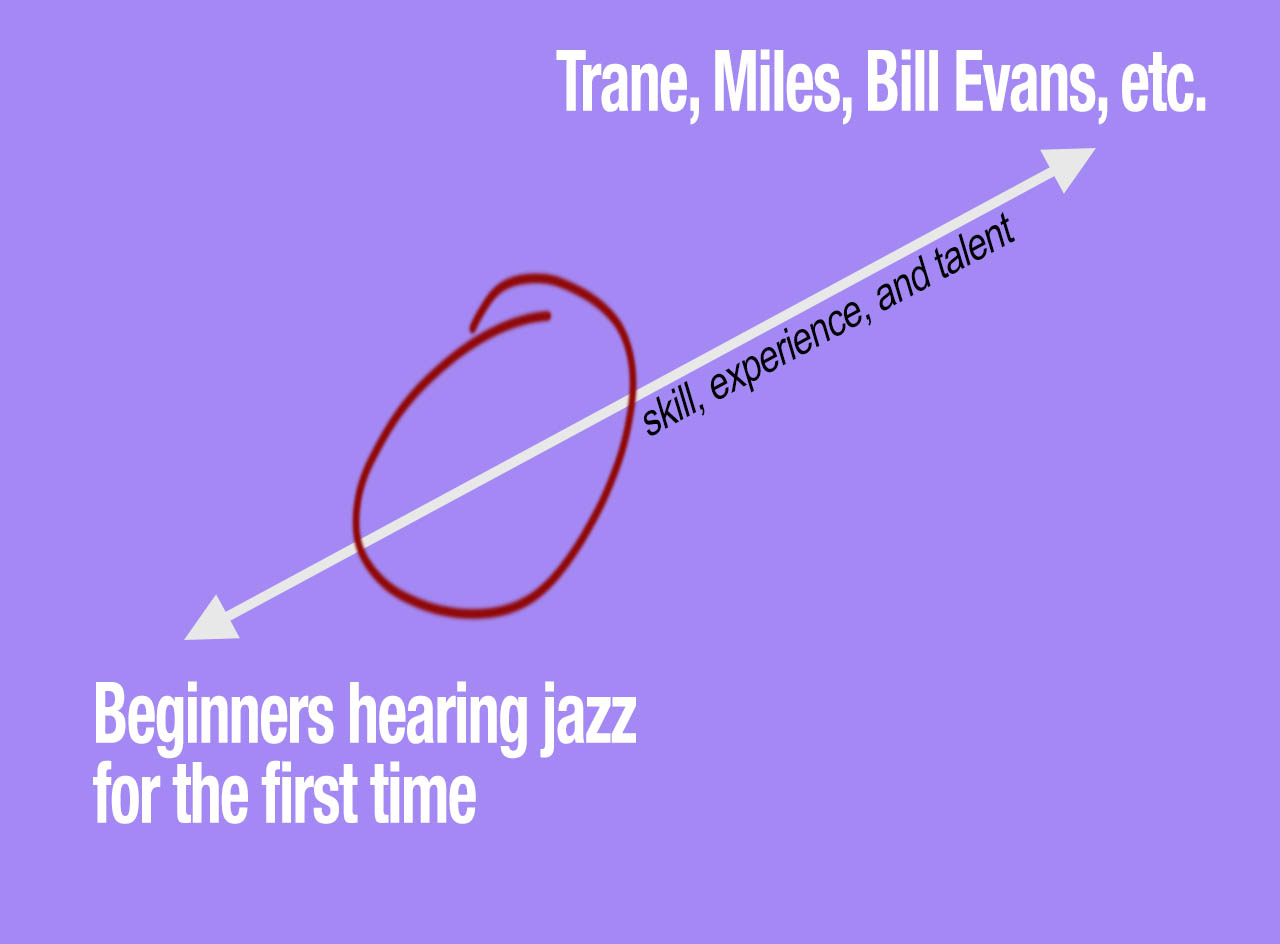 That article focused on the scales, patterns, and licks jazz musicians play in their improvisation and how those notes and the instrument seem to take priority over musical intent. The result is collections of notes with too little musical soul behind them. I call that a caricature of jazz.

Keep in mind the roots of this music-the blues played and sung in the deep south. I don’t think they were trying to outdo each other with tricky note-filled lines.

I made the point in the article that our obsession with the ‘right’ notes seems to be draining the soul out of the music. ‘Right’ notes are memorized scales, licks, patterns, transcribed solo fragments, and anything other than the driving force of the music which is the emotion from your soul.

I want to explore another element of the caricature: time and rhythm, which might be worse than the ‘right’ note obsession. I think you can more easily get away with ‘wrong’ notes if they groove. Not so with ‘right’ notes played with poor time.

Listen to less experienced jazz players and too often you’ll hear a metronomically accurate-ish flow from one note to the next, carefully placing notes in their proper place within the beats and bars. They tend to articulate each note identically with little variation in dynamics and with a feel that is too on top of the beat. One might describe it as rushed or anxious. Uptight? It’s not a swinging groove. No one’s tapping their foot to it.

Just like you can put notes ahead of musical intent, you can also put the clock-like timing of notes ahead of your musical intent.  Doing either (and both) can make the difference between a deep expression of emotion and merely playing notes. It sounds like jazz, but it lacks the soul and personality of the musician. It’s a caricature of jazz.

Can you hear your own tendency to articulate every note the same and package a bunch of them in neat clock-like spaces of four beats? For most players, it’s hard to hear. In a way, I think it’s much easier to be aware of your note choices than to introspect into your own sense of time.

While improvising, you are thinking about what notes to play next. You can hear the churning of your brain and the internal self-talk. On the other hand, your sense of time seems to live more at the subconscious level. It’s much more subtle than your choice of notes.

But where you place those notes in time has a profound effect on your music. Players are in part defined by their sense of time. Think of the difference in note placement between Bill Evans and Dexter Gordon, or between Chet Baker and Woody Shaw. Of course, there are many other differences, but can you hear the role of note placement and articulation on their musical personalities? In a way, their placement of the note became part of their musical fingerprints.

Here’s a hard question for you: can you hear and describe in words YOUR own time feel? How does it reflect your personality? Are you simply trying to consistently fit notes into the allotted time or are you expressing yourself with articulation and note flow in order to tell your story?