How self-discipline can make you a better jazz player

My book Self-Discipline Superpower is sparking some interesting conversations. Thank you to those who have added to that conversation. 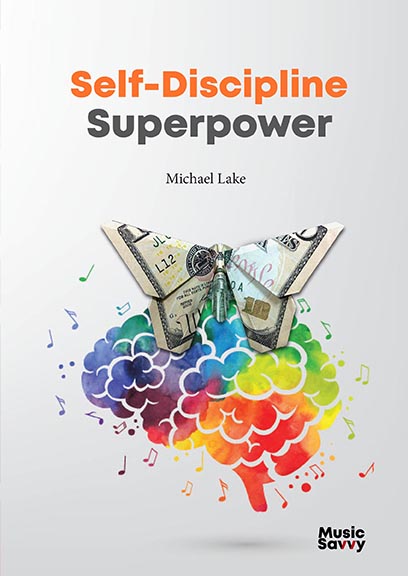 There seems to be a connection between self-discipline and authentic (real, personal, true, etc.) jazz playing. I’ve been talking a lot recently (for years, actually) about the difference between playing notes and playing music.

Jazz has become a worship of the mechanics to play high, fast, and loud, and not enough on playing the authentic imagined musical lines we hear in our head. I blame those schools that teach jazz in the traditional mechanized manner of math and science, and also the proliferation of online teaching focused more on the visual than what we hear. Eyes over ears.

In my Jazz Master interviews, I like to ask about the role of courage in being artistically authentic. And I think equally important is the self-discipline that can focus you to find and then be true to that inner musical voice.

It’s so tempting to imitate others, and at our early stages of musical development, imitation plays an important role. But as we mature and get to know ourselves much better, we develop our own musical voice.

I think self-discipline gives us a tool that keeps us true to that inner musical voice, which is especially hard precisely because it WILL be different from others.

Mankind has been around for a quarter-million years and throughout 99.99% of that time, our survival depended on not standing out from the group or tribe. Going out on a limb or expressing one’s individuality was life-threatening.

Self-discipline (and courage) can help you choose to break from that evolutionary urge and refuse to succumb to the temptation of sounding like others or like you are told you are supposed to sound. After all, this is jazz.

When someone shares with me that they wish they could tell better and more interesting stories with their improvisation, my first reaction is that they are trying to tell those stories through imitating the voice they hear in other musicians-the way they’re told to sound. That’s actually hard to do.

Unless you are a really good actor, it’s hard to tell in words an interesting story if you are trying to impersonate a famous person’s speaking style. Quick, tell a cool story sounding like SpongeBob. Your emphasis will be on the speech mannerisms rather than the content.

I’m not offering this advice to beginning jazz players or people just starting on their instrument. I’m talking to you if you have developed a certain level of technical proficiency on your instrument and have listened to enough jazz to at least know the fundamental language.

You can’t tell a good spoken story if you don’t have a sufficient vocabulary.

Click on the image below to go to my Soundcloud playlist containing a variety of cool backing tracks containing very simple harmonic movement.

Pick a track then record yourself playing a musical statement over this rhythm track. Play as fast or slow as you wish. Speed is not the criteria for quality. Play as harmonically simple or complex as you wish. Harmonic complexity is also not the criteria. No one but you ever needs to hear your recording.

The criteria for this exercise is simply to sound like YOU. Play in a way that you or someone who knows you could identify the playing as only coming from you. Listen to the recording and be ruthlessly honest with yourself. Were you trying to sound like something? The word ‘trying’ is key. Were you thinking of what to play or were you just playing? Were you simply expressing yourself regardless of its conformity to others?

My friend Dr. Rodney Brim, a psychologist and musician, shared with me an exercise he thought of. And this might help if you are thinking about what note to play next or having trouble NOT sounding like the status quo.

Rodney’s exercise is to think of someone you know, and how you, not others would describe them. Then express that in 3 or more musical phrases on your instrument. What is the sound of their personality? Can you play hints of that over one of the above backing tracks or over Bb blues or a cappella?