A rare example of excellence

I admit that I find myself too often frustrated by the awful service dolled out throughout the world. The list includes:

I’ll stop there. I have my own beliefs about why this is the case and why it is only getting worse, but I’ll table my commentary on today’s culture for another time.

The poor standard across the board is the reason why, when I find someone who actually cares about their work and takes the effort to provide excellence, they seem like a bright beacon in a dark storm.

One such person is the proprietor of Electronic Repair Service in Phoenix Arizona named Igor. With his thick Russian accent and a cigarette almost always hanging from his mouth, Igor is a no-nonsense passionate individual about all things electronic. Think ‘Soup Nazi’ from the classic Seinfeld episode, but instead of doling out delicious soup, he provides pristine repairs to equipment from stereos to professional gear to aircraft electronics.

Last year, I decided to sell off most of my studio equipment since that functionality is now inside the computer as plugins and apps. Those stacks of equipment were taking up too much space, and knowing I’d be moving at some point, I needed to get rid of it. Some of that equipment was in good working order but other pieces stopped working properly many years ago. It was all very high end stuff that in working order would be worth some good money.

I found Igor through an internet search. I had given some of this equipment to other techs in the area only to be told it was unfixable, but I held on to it all on the hope that they were wrong. I called Igor one day, told him what I had, and he said to bring it in. He was very specific about making an appointment time and asked that I arrive promptly.

I walked into his strip mall shop that looked as if the International Space Station had exploded, spreading circuit boards, parts, tools, and equipment as far as the eye could see.

He asked me to place the piece of equipment on his counter for which he made room and he proceeded to remove the top. After probing with his multimeter for a bit, he said he knew what the problem was, gave me an approximate price, and told me that he’d call.

A week later, I returned to pick up the piece, but before letting me pay, he plugged in the unit and ran through most of the front controls proving to me that it worked, and reminding me what a fine job he had done cleaning and lubricating everything to bring the unit back to new condition.

Having passed the audition, I proceeded to bring him other pieces: compressors, guitar effect processors, and reverb units. Each one was transformed into perfect working order. So it was time to put Igor to another test.

I had a rack-mounted Tascam DA-30 DAT (Digital Audio Tape) machine that I had been told years ago couldn’t be fixed since it needed parts that were no longer available.

The problem had always been with the mechanical tray that accepted the tape cartridge. It would eject the tape as soon as the tape was inserted.

As I watched, Igor removed the top and then disassembled the tape mechanism. His quick diagnosis was that the rollers, pins, belts, and other moving parts had dried out over the years of neglect and needed lubrication. It needed no new parts, shaking his head in disbelief that someone had told me the needed parts were no longer available. He grabbed a small bottle with a needle on the top and proceeded to add a drop of oil to one of the gears. He then nudged the tape drawer with his finger and it begrudgingly opened. He oiled it again, and nudged it, doing this over and over until the gear rotated smoothly, and then he moved to the next part.

I watched Igor as he lubed and nudged over and over from part to part for close to an hour. He reattached the tray mechanism and sure enough, the unit worked like new. For me, it was a lesson in patience and persistence, two attributes at which I like to think I already excel. But I realized that I wasn’t in Igor’s league!

I have other such stories of supposedly hopeless gear, but my favorite is something I brought him recently–almost a year later. My beloved and expensive McCormack DNA-1 stereo amplifier. 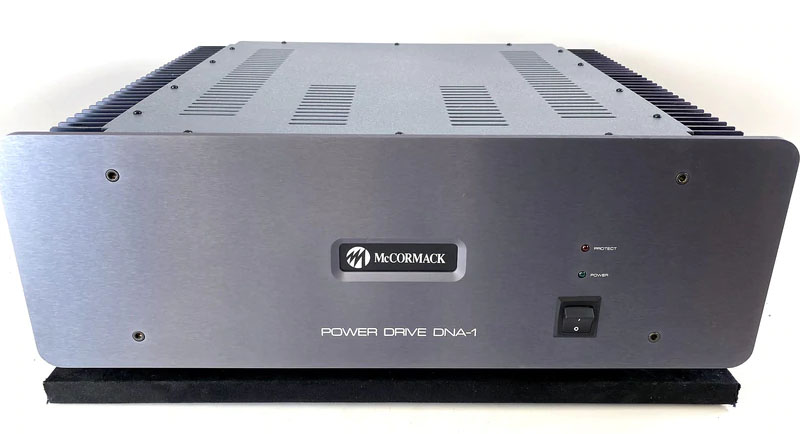 The DNA-1 is one of those 50 pound high-end stereo amplifiers. When turned on, it remained in ‘protection’ mode which blocked the sound. I was told it could not be fixed because it was a known problem with that unit. “Sorry”

I brought it in to Igor and he promptly removed the top and poked around with the multimeter. He wasn’t sure what the problem was but asked me to leave it and he’d let me know.

Several days later, I received a call from Igor telling me it was ready to be picked up. The next day I arrived at the scheduled time to a full demonstration of the perfect working condition of the amp. Igor was is rare form, taking me through the details of how he spent hours calling around the country looking for the needed parts until finding a unit from someone in Florida.

He had taken a chance in buying the Florida unit since it no longer worked for apparently other reasons. It turned out that this other McCormack had the parts mine needed, and Igor even transplanted my working components to the shiny new chassis of the Florida unit. In his proud Russian accent he told me of the difficulty in finding this alternative unit and how this earlier version of the McCormack was of far superior quality. Apparently mine was a later model built with cheaper parts. Igor had throughly cleaned the inside and even replaced some capacitors just because of their age. No extra cost.

I made the ‘Soup Nazi’ reference above not to insult Igor but to make a pop culture reference most people recognize that characterizes someone intensely proud of their work who delivers first rate results, and who expects a certain respect from their customers. Igor did chastise me for the dirty and seemingly neglected condition of some of the equipment I brought him. Perhaps he cared more about that equipment than I did at the time!

Picking up the McCormack amp on that Saturday morning, someone walked into his shop asking for a part. Igor looked up at him standing in the doorway and in that stern Russian accent, asked if he had made an appointment. Startled, the customer said no, and Igor explained to him that this was not a retail supply shop open to just any walk-in traffic.

Excusing himself from me, Igor then politely asked what part the customer needed. The man handed him a tiny LED (light) requiring a specific voltage for an obscure stereo equalizer. Igor turned around, took a few steps back, and reached his arm down into a mountain of various components, pulling out a small brown envelope. Pulling an LED from the envelope, he handed it to the man, “This is what you need. That will be $5.”

Perhaps a few decades ago men like Igor would be commonplace, but in my experience, his brand of care, knowledge, work-ethic, and pride in his work has become all too rare.

In case you have a piece of electronic equipment in need of repair, and not just in Phoenix, you can reach Igor at: