You’ll hear me say that over and over in my masterclasses and throughout my online course Improvisation Savvy. I’ve written it in Jazz Patterns for Ear, Alto Trombone Savvy, and every other method book I’ve published.

I’m referring to some particular single exercise or warmup element I’ll recommend that is important to one’s overall practicing or playing routine. Just do it a little bit every day as part of your practicing.

I recommend this because the power of doing something-just a little something-every day can be transformational.

The approaching new year for many signifies the chance for renewed personal change and growth. So I want to share with you how small habitual activities can grow into important changes within your life. Good habits can manifest themselves into losing weight, staying healthy, raising happy and well-adjusted children, earning a greater income, getting smarter, and certainly becoming a much better and more confident jazz player!

If you are familiar with my work, you’ve probably heard or read my praise for the book Atomic Habits by James Clear. Written from his meticulous research along with his own observations, Clear makes a compelling case for the transformative power of habit. 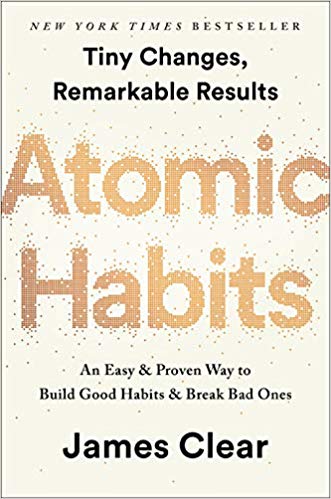 Why does Clear use that word, Atomic?

He views habits as 1. tiny activities in our lives, 2. the building blocks of who we become, 3. like an atomic bomb, a mighty long-term power arising from those tiny atomic activities swirling around.

When I’m recommending that people do something just a few minutes each day, I’m referring to that particular atom within their practicing.

Clear doesn’t just consider habits a ‘nice to have’ in our lives. He sees them as the essential building blocks defining who we are, for good or bad.

Popular opinion states that achievement begins with a goal. But is that true or even enough to become much better at something? After all, every Olympic athlete has the same goal, which is to win. So what distinguishes the swimmer who walks away with the gold medal from everyone else who had that identical goal?

A goal is an outcome you desire, so people typically start with the outcome: I want to play jazz better, or I want to play higher and faster on my trombone, or I want to play fluently over Giant Steps. Then from that outcome, they back into a process or a plan they believe will best get them to that desired outcome. The assumption is, if I do those things and reach my outcome, I’ll become the kind of person I want to be.

Clear believes that it’s actually the reverse that gets you quicker to your goal. Don’t start with the goal, but instead start with knowing the type of person you want to become.

Whether you realize it or not, you are always building systems. Unfortunately, most people are not aware of what they are building. They wake up one morning halfway through life wondering how they got there. Well, they got there through a lifetime of systems built from their mostly unconscious habits.

So how can you build the systems that lead to you being the player you imagine you can be?

You want to be the best possible player you can be, but how? Well, practice three hours or more each day.

You want to be thinner, but how? Stop eating carbs.

To reach either of these goals requires tremendous willpower. Can you sustain your hours-long practice regimen or stay away from bread for the long run?

It’s hard to constantly resist what you desire and it’s why people gain back their original weight or why musicians fall short of becoming the player they could have been. Sheer willpower isn’t sustaining enough to build good systems through habit.

There’s another difficulty with developing habits through willpower. Good habits pay off in the long term while bad habits pay off in the short term. Think of a smoker going outside to enjoy a cigarette. His short-term payoff includes perhaps some socializing with a fellow smoker, a break from work, and the stress release from inhaling that warm aromatic smoke. Mmmmm…

We all know the long-term result of that habit.

Consider the short-term payoff of a big juicy cheeseburger wrapped in bacon with a side of fries and the long-term ill effect of its habitual consumption? The reverse is true of ordering a garden salad. Not so yummy today, but after a lifetime of them, you can remain active and attractive, and around to watch your children live much more of their lives.

On the other hand, with practicing, you put in your time, and when you finish for the day, are you a better player? Maybe in some small short-lived technical way, but the real payoff comes in the long-term.

If you wonder why you habitually do the things you do, it’s because behaviors that get rewarded get repeated and behaviors that get punished get avoided. Salads aren’t exactly a punishment, but they certainly lack the dopamine squirt of that cheeseburger!

So if slavishly practicing doesn’t provide much of a short-term reward, how can we build robust practicing into a long-term habit? Well, instead of relying on willpower, what if instead, you focus on the type of person you want to become? Rather than looking at the clock, dreading the next hour or more, and mustering up the discipline for this period of solitary playing, you focused instead on the type of person who seems to effortlessly improvise jazz and gains the material and popular rewards of their accomplishment? Ask yourself, what would THEY do?

I have always enjoyed practicing. I enjoy exercising daily and juicing each morning and eating clean, mostly raw veggies for my meals. But I am terrible at doing things habitually that I don’t feel like doing. If you ask how I maintain decades of what my friends call my intense discipline, my answer is that I hold in my mind the kind of person who plays trombone well and lives a long life free of serious health issues.

Both my parents had debilitatingly poor health throughout my entire life and I was determined to live free from that terrible obstacle. (By the way, rheumatoid arthritis and polio developed in both of their teen years was not their fault, but still…).

Place this under the chapter of affecting what is within your control. Life may throw you curveballs, and there’s little you can do about those. This article is about creating those moments of your life you can directly influence.

So, if it’s not goals that create success, but instead, your systems comprised of your collection of daily habits-all those little gears in this complex human machine-think about the person you wish to become and how that person behaves. What are their mindsets and habits? “What would THEY do?”

Consider two lifelong smokers who each recently stopped smoking. Each of them is asked if they’d like a cigarette. One of them says, “No thanks, I’m trying to quit.” The other replies, “No thank you. I don’t smoke.” Who do you think is more likely to remain cigarette-free long-term?

One is applying her willpower to resist smoking and the other has become in her own mind a non-smoker. She’s not depriving herself of something she wants. A non-smoker would never accept a cigarette. It’s not who they are. It’s not what non-smokers do.

Back to playing jazz, how would Michael Brecker answer the question, ‘to practice or not to practice’? Do you think Coltrane or Sonny Rollins had to psych themselves up each day to practice? Of course not. Their habits flowed naturally from their crystal clarity about the player they wanted to become. Daily habitual quality practicing is what great jazz players do.

As a purveyor of jazz skills methods, I’m well aware of the challenge I confront in this area

If I cranked out ii-V-I licks or solo transcriptions or chord/scale books, my audience would more quickly gain a short-term reward. The next time they were confronted with D- G7 Cmaj7, they could pull up a lick and sound like they were improvising. And, boy, would that be a hell of a lot easier for me to sell!

But I believe that the truth of jazz lies in the skill of spontaneously composing music based on the emotion of the moment and the story you wish to tell. No one can feed you the notes to that story.

The primary skill that allows your story to be amplified through your instrument is the frictionless connection between your musical mind and your instrument. And that doesn’t come neatly packaged inside a box delivered to your doorstep this afternoon.

Building and then reinforcing those necessary and complex connections within your brain takes time. How much time? How good do you want to be? The process is the same whether you wish to become the next innovative jazz genius on your instrument or just good enough to fearlessly and impressively stand up in front of an audience emoting over a chorus of 12-bar Bb blues.

The total time you’ll need to invest based on how skilled you choose to become is relative, but what remains an absolute is the requirement to practice the right things each day in order to build a process through habits that materially elevate your improvisational skills. Practice 15 minutes or 5 hours, but do it well and every day.

Through it all, I can hear you begging, “Just tell me what notes to play over A7 #9 b5. But I don’t think that best serves you in the long term.

Quick and easy sells like hotcakes. Slow and difficult… Not so much.

I am elated every time someone writes or calls me to thank me for the transformation they hear in their playing. “I’ve been working through Improvisation Savvy for a few months now and I am starting to play what I hear inside. I’m excited.”

I have respect for those people because I know that they’ve stuck with something despite its difficulty and their long wait for the payoff. But, unfortunately, they are in the minority.

1. Hold in your mind the vision of a player you admire and consider the effort he put forth to become the player he became.

Remember the people I mentioned earlier being asked if they want a cigarette? Your answer to the question, “Should I practice today?” is not, “I should because I’m trying to get better.”

How about instead, “Of course, because I’m a musician improving his jazz skills. And that’s what we do.”