The four stages of competence

Mastering a skill involves an integration of awareness and competence. Being aware of your current level of competence is necessary for improving any skill from riding a bike to brain surgery, including of course, jazz improvisation.

He was the first to publicize the integration of awareness and competence, identifying that individuals are initially unaware of how little they know when they first begin to learn something. Once they become aware of their ignorance they can begin to consciously develop their skill and eventually, after much repetition attain mastery.

The goal for anyone intent on mastery is to perform the skill without conscious thought. Think of the great jazz masters like Bird, Miles, Trane, Sonny Rollins, Bill Evans, and Wayne Shorter, to name just a few.

At a certain point in their development, they no longer needed to think about the notes, the changes, or the form. Their skill became second nature and required little to no conscious thought. Some call this flow. Noel Burch called it Unconscious Competence.

Burch identified Unconscious Competence along with its three preceding stages of skill development as: 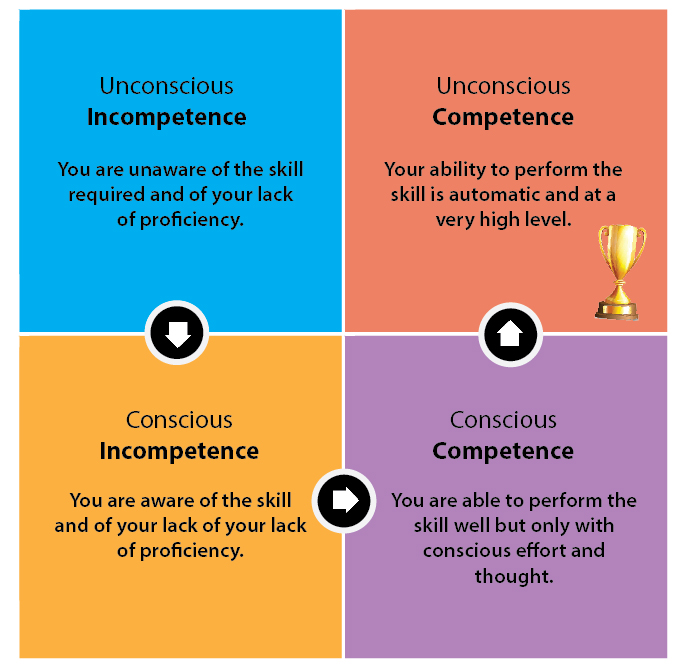 This is where a good teacher or knowledgeable third party (mentor) plays an important role. I remember spending much of my first year in college unaware of what I needed to know in order to become a much better player. I didn’t know what was lacking in my jazz and my fundamental trombone playing. Prior to college I was winning awards and being told I was a good player. Life was good.

Part of the difficulty of moving from stage one to two is that your ignorance is bliss. You don’t stress about what you don’t know. Stress is brought about when you start to realize that you aren’t nearly as good as you thought.

I became conscious of my shortcomings as time went on, but then I faced the next stage which was knowing how to improvie those shortcomings.

My peers in college gave me perspective as much as anyone. We listened to records together and discussed them, we performed together and then listened back, and we went to concerts of great musicians and discussed that experience. Two friends I learned a great deal from were Alan Chase, having since made a career at Berklee and the New England Conservatory, and the great drummer Lewis Nash. We were three very curious young musicians.

After conscious Incompetence comes the third stage which is Conscious Competence. At this stage you are aware of your skill and how to perform it well, but it requires conscious effort.

Here, you are probably aware that you have mastered your strengths. If you are teaching someone at this stage who believes they are done improving, one way to help them move forward into the next stage is to encourage them that they are capable of doing even better. Practice, practice, practice.

Sonny Rollins is my archtype for this stage since he became very clear at certain moments of his career that he could play better. So, rather than bask in his current level of fame and competence, he worked hard at getting to the next level that he knew was available to him, but only if he worked at it. Call that extremely conscious competence.

So much of my personal teaching method encourages players to move from their conscious focus on the chord/scale relationship to discovering the music within.

I probably don’t say this enough, but that transition from conscious competence to unconcsious competence first requires skill with those scales and of the knowledge of their use over harmony. Most players unskilled with scales and ignorant of jazz harmony won’t likely be served by bypassing that knowldge and skipping ahead to simply playing whatever comes to mind. Some great masters knew little of harmony and chords, but they were the minority.

I focus so much on improvisational unconscious competence because everybody else is teaching improvisation focused on eyes and analyitcal brain over ears and innate personal music. I hear too many players performing scale-focused “improvisation” well after they could be moving on past the conscious thinking driving that way of playing.

Players write and tell me that they were unaware of anything beyond conscious scale-based “improvisation”. They were stuck in conscious competence without knowing any other means beyond that existed of improvising.

This shows us that there are elements of these four levels that exist within segments of competence. You could be a very competent improviser but unkowingly ignorant of certain things that can elevate your skill.

You could sound very skilled at unconsciously making your way through a chorus of rhythm changes by stringing together the licks you have memorized over a lifetime to perfection. But are you aware of the skill that could be descibed as translating your emotions or the energy of your band or audience through spontanious composition? “I never thought of it that way.”, you might reply.

I often talk/write about the automatic function of the brain in creating and reinforcing neural connections. It’s the brain’s way of helping us attain unconscious competence and therefore, of being efficient with our energy. That nuerological process can move our musicianship to the unconscious competence level but it can also lock us into conscious incompetence when we practice the wrong things over and over.

Your brain doesn’t know that your piano fingers shouldn’t always be horizontally straight and rigid or that you shouldn’t iron-fist grip the trombone slide. But if you spend decades practicing and performing like that, you will find it difficult to play with the ease that instrumental skill and fluid improvisation require.

Again, this is where a good teacher/mentor/master comes in. It is also a critical reason for developing good foundational technique early on. Learn your scales and chords and patterns and transcribed solos. But at a certain point, stop thinking about them.

Where are you in this continuim of the four quadrants? What can you do in this new year to move to the next one?