The many benefits of recording yourself playing your instrument

Last week I sent out a video lesson from my course Improvisation Savvy. The lesson took players through the process of playing on their instrument the music that lives and is often trapped within their musical imagination.

A few people completed it but not nearly as many as I had hoped for. In thinking about why, I learned a few things, one of them being that recording oneself seems to be more difficult for people than I anticipated.

This difficulty with recording is a problem because listening back to one’s playing is essential to learning what needs improvement. For most of us, what we manage to hear as we play is only a portion of what comes out of our instrument. We tend to be pre-occupied with getting the notes right or some other aspect of our playing we happened to be focused on at that moment, to the exclusion of dozens of other things we don’t hear.

To be fair, I was asking people to record themselves over a rhythm track, which requires a little more than simply recording oneself a cappella. But because of the importance of this tool outside of my challenge, let me describe some basic ways to record oneself as well as the many benefits of doing so

If the only piece of technology you own is a phone, then recording over any other track becomes difficult. You could play the rhythm tracks on your internet-connected TV or game console, and record your playing over those tracks using your phone’s recording capabilities, but it is somewhat cumbersome.

I am reminded of my high school days when I would play a J.J. Johnson track of his solo on, say, Old Devil Moon, on a simple push-button cassette tape recording device next to a second device. The second device would record both J.J. and my imitation of his solo so that I could listen back to see how closely I played that solo of the master. 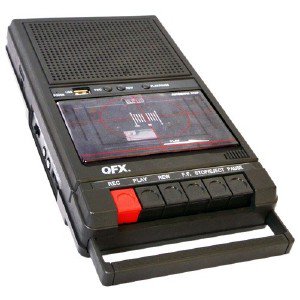 But several decades later, it has become much easier. Yes, you can imitate my early recording technique using a game console, TV, or laptop to play the track and then record both using your iPhone, but let’s explore a better way to record and listen back to your playing.

If you own a Mac, Garage Band is already installed. I suggest investing a little time in learning this fantastic app.

At the most basic level, you can “import” an audio track from any source (MP3, .WAV, etc.) then record yourself over that track. With some headphones, you can isolate your playing and even separate it from the rhythm track through panning left and right.

Once you’ve recorded the track, go to “share” in the menu and with the yellow circle bar extending over the length of the track, select “Export song to disk”. Choose the file format of your choice and hit “export”.

You now have a multi-track recording of your playing over a rhythm track.

I mentioned above that recording yourself allows you to hear your playing within a more objective perspective.

Besides recording yourself over a rhythm track like Aebersold, Band in a Box, iReal, or the tracks that I provide within Improvisation Savvy, there are other applications for recording and each provide a distinct benefit.

For example, the lesson I mentioned at the top asks you to record you singing an improvisation over a rhythm track. Then transcribe that singing and play it on your instrument. As the final step, record yourself playing that transcribed solo over the rhythm track. You now can experience playing the music closer to your imagination without the friction of your instrument.

But you can do this with any transcription. Transcribe eight bars of a Michael Brecker or Dave Liebman solo, learn it, then record playing it over a rhythm track. How close do you sound to Breker or Lieb?

Without the ability to listen back, you will probably think you sound better than you do.

Players frequently send me snippets of their playing and I offer feedback. They are typically shocked to hear something within their playing they’ve never before heard. In fact, just this week, a guitar player sent me something and when I pointed out that he tended to be uncomfortably ahead of the beat, he wrote back that he had never before heard that but now can’t NOT hear it.

So, record yourself and listen back critically. Hear the good and the bad. Send it to someone else for their ears. It’s often difficult to be objective about our own playing.

I’ll leave you with something written to me just now by a subscriber:

It’s never too late to start!